The Story Behind the Logo 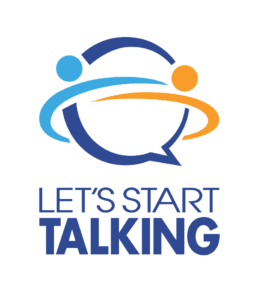 The Let’s Start Talking (LST) logo is a stylized depiction of two people reaching out to one another across a large circular graphic, demonstrating LST’s effort to create life-changing conversations around the world and across the street.

To honor the work of the organization’s founders, Mark and Sherrylee Woodward, while designing an updated, contemporary logo, two figures talking from the original artwork were refashioned as non-binary to be male or female and of any ethnicity or race.

The circular graphic plays a dual-symbolic role, representing the globe to show that LST connects countries, languages, and people all over the world. It also includes a pointer extending from the lower right portion to form a conversation bubble, thereby also demonstrating the meaningful discussions that change lives.

The sans serif font was chosen to create a clean, contemporary look that compliments the stylized appearance of the graphic. The word “TALKING” is in bold because it is at the core of what LST does to build relationships. It is also a subtle nod to the original logo.

The colors in the artwork are blue and gold. Blue represents heavenly grace, hope and the state of servitude, while gold represents courage, zeal and adventure.